I had to be at the destination by 18:00
Since I have about 15 minutes to reach the hotel from home I left around 17:40. So far so good you might think.

Once I was on the road I became aware of a major traffic accident.
Why didn’t I leave earlier!

Full of stress behind the wheel, I connected the group app of the shoot, to make clear that I’m on my way. Fortunately, a number of people are still on their way to the hotel, so I’am not the only one that is running a little late.
Around 18:45 I’m finally on location at the beautiful Main Port Hotel.

The hotel room was packed and up and running with the other members of the crew.

I was admiring the surroundings of this beautiful and deluxe hotelroom.
The perfect set for a wonderful photoshoot.

After the unpacking of my make up and brushes I started on the first look of my gorgeous model. I went for a soft nude glam. 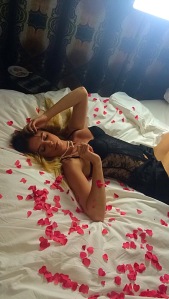 This look completed nicely with the romantic and seductive aspect of the shoot.

We went for a more heavy make up with a dramatic contour when it came to the second look. Personally I’am a big fan of heavy contour and a over the top lippie.
I do not really believe in less is more 🙂

The shoot of this second concept was in the bathtub of the hotelroom.

The leaves made ​​the water green, this was a beautiful shot in combination with the green eye shadow and bathing suit.

I was so happy that the photographer had arranged some good food because I was nearly starving to death. This was a real nice gesture of her.

After my model was finished with her part of the shoot I stayed for some networking and socializing with the other models and makeup artists.
It was a long evening/night but it was really worth it.
I got the chance to work with a group of talented people, gained experience and made great connections.